You are here: Home » Tibet 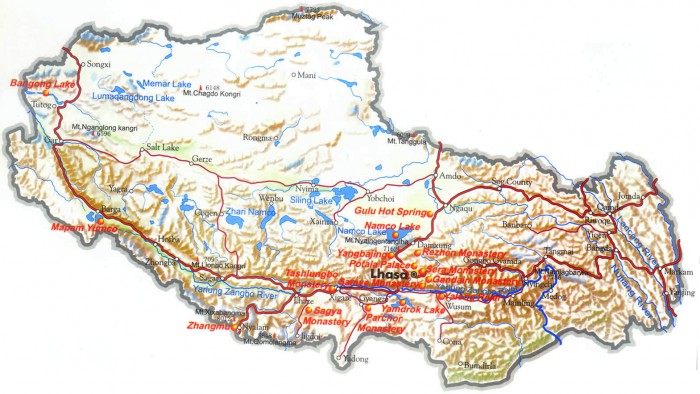 There are very few lands on earth which have captured man’s imagination for almost mystical aura then Tibet. This hidden kingdom, situated in the heart of Asia, is also called the "roof of the world". This vast expense of land is stunning and offers fantastic vistas mountains, plains, lake, people, and culture belonging to a lost world, far beyond the 20-century plane. Ever since Tibet was opened for tourist in 1984, many Tibet operators in Nepal are offering wide range of designed tour packages to suit every individual taste budget and schedule with guaranteed departure. Tibet is a land of dramatic landscapes, scared relics, butter lamp, illuminated temples and monasteries and deeply religious agile and hospitable people. This roof of the world something unique to offer to every traveler, from Lhasa, Potala palace, to the Jokhang Temple the spiritual center of Tibet, and Drepung Monastery to Lhamo Latso Oracle lake, whose water revealed clues which led to the identification of the 14th Dalai Lama, and Holy Mount Kailash and Lake Manasarovar. This highland is the place of Sky burials, the indispensable yak and life sustaining salted butter tea, from which visitors will retain memories to the rest of their life.

The altitude of Tibet is over 4,000m above sea level. Possessing more than fifty peaks above 7,000m, Tibet is the home to eleven Himalayan mountains over 8,000m. India, Nepal, Bhutan, Burma and Pakistan are its bordering countries. Nomads have been remaining much the same as they did one hundred years ago. The nomads still subsist from their yak herds. The Tibetan people and their religion are inseparable. Even in their earliest myths, one finds references to Tibetan religious beliefs. The Bon religion dominated Tibet in the past. Gradually, after the introduction of Buddhist statues and later Sanskrit documents from India, Buddhism crept increasingly into Tibetan culture. Tibetan Buddhism is the culmination of some early Bon beliefs, Indian Buddhist texts and several great lamas. Buddhism and politics had been flourished in Tibet since King Tsrongsang Gampo got married with the then Nepali princess, Bhrikuti

A visit to Tibet is an astonishing experience. The traveling to Tibet is difficult and unpredictable. The infrastructure is poor to non-existent. The Qinghai-Tibet Plateau, in the southwest of China, has held high the image and reputation of Tibet being "the Roof of the World". The majestic Tibetan highland stands on top of the world and its unique cultural tradition has owned an international fame. The great Himalayas lie in its south with the towering Mt. Qomolangma standing above all world's peaks.

Mount Kailash is the abode of Lord Shiva and his divine better-half Parvati. It is one of the most important pilgrim centers for both the Hindus and the Buddhists. Apart from Hindus and Buddhists, Jains also acknowledge Kailash as ASHTAPADA and PADMA HARDA. They believe that Guru Nanak meditated here.

This discover Lhasa tour takes you to the spiritual and secular center of Tibet, where you could visit Potala palace, perched high above the city, the holiest temple Tibet's, the Jokhang, and the Gelugpa monastery of Drepung monastery.

Tibet tour offers you some of the most amazing landscape on Earth and it is an Adventure trip for travelers on a limited time & Budget. The Friendship Highway is an important artery of commerce; it is also Tibet’s most popular tourist route.