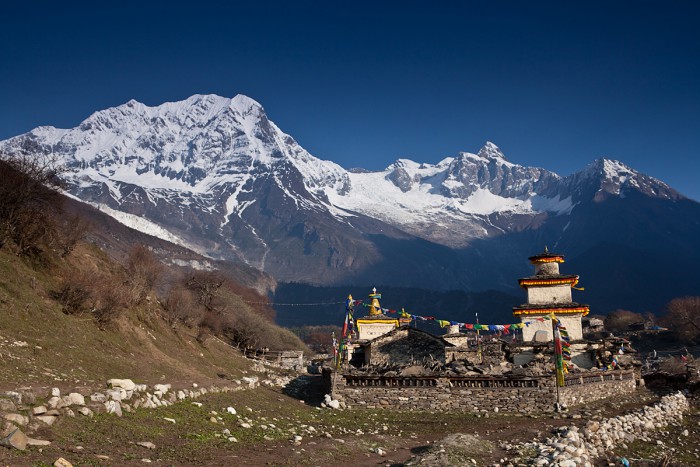 This trek was officially opened to tourists in 1991, but mountaineering expeditions have long had access to the area. In 1950 a party led by HW Tilman trekked from Thonje to Bimtang and Colonel Jimmy Roberts crossed the Larkya La looking for an interesting mountain to climb. Manaslu (8156m.) was attempted by Japanese expeditions every year from 1952 until 1956, when the first ascent was made. It thus became known as a 'Japanese mountain', and much of the information about the area was available only in Japanese. The Japanese continued to dominate the climbing scene on Manaslu until 1971.

Though the Larkya La is not a difficult pass, the trek around Manaslu is harder than most in Nepal. In many places the walls of the Budhi Gandaki valley are perpendicular, so you cannot walk along the bottom of the valley. There is a huge amount of wasted climbing involved during the first part of the trek as you climb up and down over ridges or onto shelves to bypass cliffs. The trail is rough and steep and it often literally hangs on a bluff high above the river. The trek is remote and has no rescue facilities or opportunities to bail out if you are tired. There is only one facility that might conceivably be called a trekkers' hotel, and there are few English signboards between Arughat and Tilje.

The trek is geographically spectacular and culturally fascinating. The inhabitants of the upper Buri Gandaki, a region known as Nupri ('the western mountains'), are direct descendants of Tibetan immigrants. Their speech, dress and customs are almost exclusively Tibetan. There is still continuous trade between Nupri and Tibet; Chinese cigarettes, for example, are found more frequently than Nepali cigarettes. The mountain views in Nupri are sensational and the crossing of the Larkya La is one of the most dramatic of any pass in the Himalaya.

Day 01: Drive from Kathmandu to Arughat Bazaar (570m.) which takes about seven hours.

Day 02: Trek from Arughat Bazaar to Soti Khola (530m.) and it takes about six hours.

Day 17: Trek from Nagdi to Besishahar (823m.) which takes about four hours.

Day 18: Drive from Besisahar to Kathmandu which takes about seven hours.

Facts of the Trip